The trough of social media disillusionment

As usual, Frank Chimero manages to capture what a lot of people in our neck of the woods are thinking in From the Porch to the Street. It’s an interesting, considered lament about how Twitter has changed, but it’s this part in particular that caught my attention:

Have you heard of evaporative social cooling? It says the people who provide the most value to a social group or organization eventually burn out and leave, undermining the stability and progress of the group. Most of my internet friends have been on Twitter since 2008, so they probably fall into this group. How much more is there left to say?

The linked post is Xianhang Zhang’s The Evaporative Cooling Effect, a broad article from 2010 that covers the design flaws in most social platforms. It’s definitely worth reading the whole thing — I’ll just quote this interesting way to classify different online communities:

There are two fundamental patterns of social organization which I term “plaza” and “warrens”. In the plaza design, there is a central plaza which is one contiguous space and every person’s interaction is seen by every other person. In the warren design, the space is broken up into a series of smaller warrens and you can only see the warren you are currently in. There is the possibility of moving into adjacent warrens but it’s difficult to explore far outside of your zone. Plazas grow by becoming larger, warrens grow by adding more warrens.

It feels like Twitter started as a warren and morphed into a plaza, which is where most of the current discontent is coming from — “This isn’t what we signed up for!”

Going even further down the rabbit hole, Zhang links to Eliezer Yudkowsky’s 2007 piece Evaporative Cooling of Group Beliefs, which has some further interesting thoughts on how to create healthy online communities:

It’s the articulate trolls that you should be wary of ejecting, on this theory—they serve the hidden function of legitimizing less extreme disagreements. But you should not have so many articulate trolls that they begin arguing with each other, or begin to dominate conversations. If you have one person around who is the famous Guy Who Disagrees With Everything, anyone with a more reasonable, more moderate disagreement won’t look like the sole nail sticking out. This theory of Internet moderation may not have served me too well in practice, so take it with a grain of salt.

On Twitter there is no way to exclude trolls — there are just too many of them. So there is this huge problem that inevitably appears once a community grows sufficiently large:

All this to say that designing effective online communities is much more difficult than it might have appeared at first. We couldn’t see into the future when Twitter became a thing, so who knew what would happen once the growth monster grew too big? It reminds me of Gartner’s 2014 Hype Cycle for Emerging Technologies: 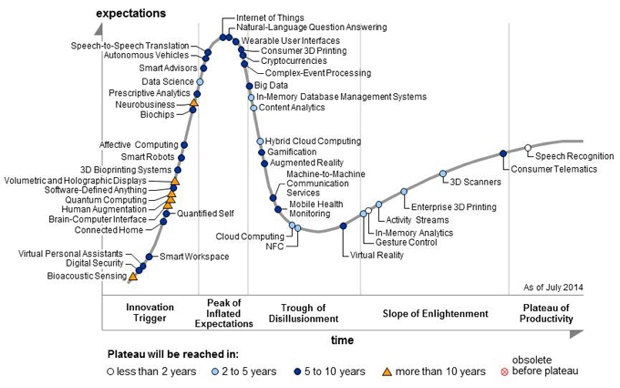 I think we’re firmly in the trough of disillusionment with social platforms like Facebook and Twitter. I think we’ll get through it, but it feels like we’re all waking up right now going, “Wait, that’s what this has become?” We can — and will — do better. But it’s going to take time.