Cennydd Bowles casts a critical eye on the UCD process in Looking Beyond User-Centered Design. He lists several weaknesses of UCD, including the negation of style — the idea that “Good design is invisible”:

By negating the idea of a designer’s influence, we also negate the idea of style within the UX discipline. We’re saying that, done properly, it should be impossible to tell one UX designer’s work from another’s. There should be no signature elements, no philosophical movements, no overarching tenets except that of transparency. […]

Of course our designs must put users first. But there is never just a single way to meet user goals. Instead of trying to deprecate style, we should embrace it as a way to drive our practice forward and lend personality to the things we make. In a marketplace of bewildering clutter, products with a damn opinion are by far the most interesting.

Cennydd’s main point is not that UCD is a bad methodology and that we should stop using it, but that its dominance might be a problem. Designers should be familiar with many modes of design, so that we can draw on a variety of techniques, not just our favorite one. It’s a good article, well worth your time.

One of the alternative approaches that Cennydd touches on is Activity-Centered Design (ACD). I want to focus on that because Mike Long wrote a great article about ACD recently, cheekily called Stop Designing for “Users”. He discusses some limitations of personas before introducing Activity Theory, and a technique they use often called the Human Activity System Diagram.

As an example, Mike shows how he used the diagram to understand behaviors and actions in a local carpool: 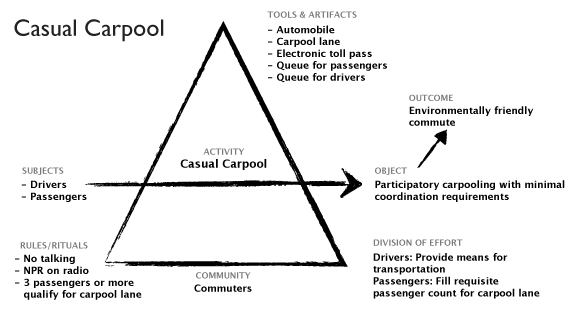 Mike explains how ACD resulted in a better understanding of the problem (and possible solutions) than UCD would have:

By analyzing the whole system, rather than individuals, I came to the realization that the objective for drivers and passengers to carpool with minimal coordination was already happening. In the casual carpool pickup spots rituals and norms naturally emerge with readily available tools and artifacts. Namely, vehicles and queues. What about other issues like lost-and-found items? The system has already compensated: If someone forgets to take a purse or a phone when they get out of a vehicle, the driver can simply post “found” signs at the head of the passenger queue. Any other solution I can think of would require another layer of coordination between drivers and passengers.

Both these articles challenged me to think broader than UCD and explore other design systems — even ones I’ve been skeptical about in the past, like Genius Design. I realised that even though UCD is a proven way to build great user experiences, it would be foolish to ignore the good lessons we can learn from other methodologies.