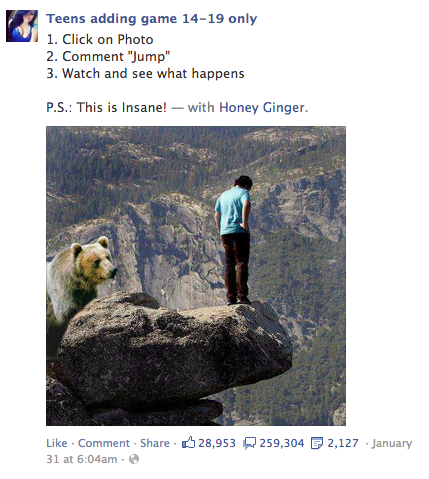 You only have to think about it for 4 seconds to realize that making a comment on a photo on the web will result in you watching and seeing absolutely diddly-squat (“P.S.: This is not Insane after all!”). And yet, in this particular case, 259,304 people thought about it for 3 seconds or less, commented, waited and saw nothing, and then moved on to the next thing.

The question is, why do Page admins do this? What’s the use of tricking people into commenting on photos, especially when they’ll realize right away that they’ve been made to look like a fool? Well, because there’s money in it, of course.

This is a pretty transparent scam to beat Facebook’s EdgeRank system — the algorithm that Facebook uses to determine what articles should be displayed in a user’s News Feed. When someone comments on a picture it makes it more likely that the picture will show up in their friends’ News Feeds, so it’s an easy way for a Page to gain more exposure very quickly.

Once these Pages have built up hundreds of thousands of “Likes” using the scam, they usually do one of two things. They either start punting things they want to sell, or they sell the Page itself to a business that changes some of the details and uses it as their instantly enormously popular brand Page.

This is obviously pretty dirty, and also nothing new — we’ve had black hat SEO and dark patterns since the dawn of the web. But what I can never understand about the people who use these tactics is why they don’t long for the satisfaction and personal growth that comes from doing real work and reaping the rewards of that. Why create a community of people who couldn’t figure out that you’re scamming them, as opposed to a real community that values your company and what you do? I’ve written about this before in my defense of doing things the hard way:

When we do things the hard way, we invest in ourselves in the best possible way. We kick off an endless cycle of learning and mastery that helps us grow and lead fulfilling lives of purpose. When we take shortcuts, we become mere pretenders. We learn how to play the part, but there is no substance or continued growth. The instant gratification makes us build the house of cards ever higher, which brings anxiety about the whole thing coming tumbling down. Why would we shortchange ourselves like that?

So what can we do about these scams? Well, for one, obviously don’t comment on it. But I also recommend clicking on the little arrow on the right and hiding the post. That will tell EdgeRank that the person who commented on the photo is not worth paying attention to, so in time you’ll see less and less of those kinds of posts. Who says we can’t all be EdgeRank Optimization specialists?