The logistics of usability testing on mobile devices

I read a lot about prototyping native apps and mobile usability testing, and since everyone’s process is different, I wanted to give an overview of the process we settled on, since we’re really happy with it so far. It was very important to me that all our offices would be able to observe the usability tests, so that guided a lot of the decision-making. Here’s how we’re doing it…

After reviewing and trying out every prototyping tool known to man, I settled on Proto.io for this project. There are so many great options out there that it’s hard to go wrong on a choice of tool. Proto.io was the best for me because of a few key features:

Of course, I can’t show what the prototype looks like at the moment, but as soon as the app launches I’ll update the post and embed it here.

I got lost in mobile usability testing guides for days — there are so many good ways to do it. At first we considered remote testing, but it just wasn’t a good option for us because we were going to do part IDI (in-depth interview) and part usability testing, so we needed a way to be in the room with users and dig deep into certain areas.

I’ve seen some crazy setups — my favorite and weirdest is probably MailChimp’s “hug your laptop” idea. It’s a brilliant hack, but I was worried our non-tech savvy users would have trouble with this, so I needed another solution.

I ended up going with Bowmast‘s Mr. Tappy kit, and I attached a Logitech HD Pro Webcam C920 to it. We played around with it in the office first to make sure it’s going to work: 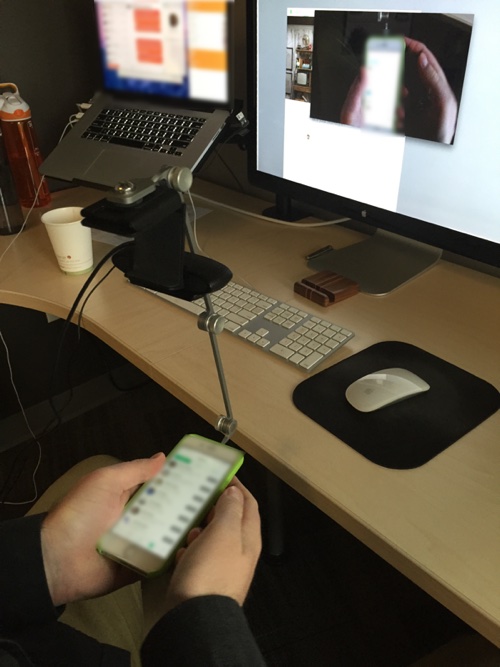 With that out of the way, it was on to the next challenge — how to stream it everywhere.

This part was much easier than I thought, simply because we already use Vidyo for videoconferencing in all our offices. So every time I started a usability test I would start my meeting in Vidyo, and then people from our other offices could dial into my meeting from their observation rooms. They could see the room on one screen, and the participant’s phone on another. It worked like magic:

What we ended up with is a setup where I can do usability testing in person on mobile devices, record the sessions, and have people observe these sessions from anywhere in the world. It was an incredibly productive few days, and I’m now working my way through fixing all the usability issues we picked up. Can’t wait to show this to you when it goes live! 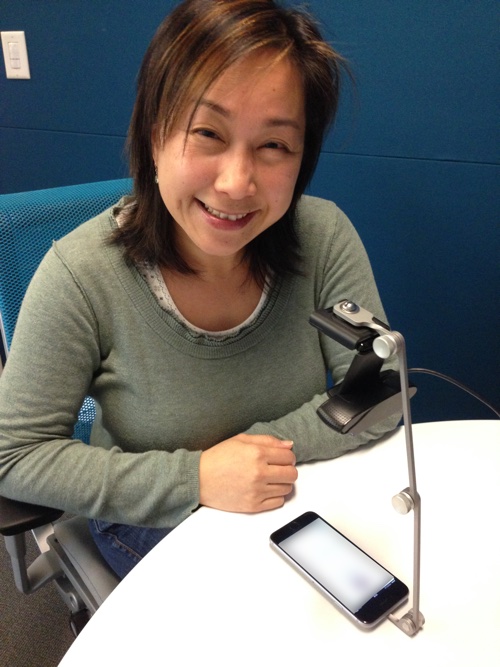