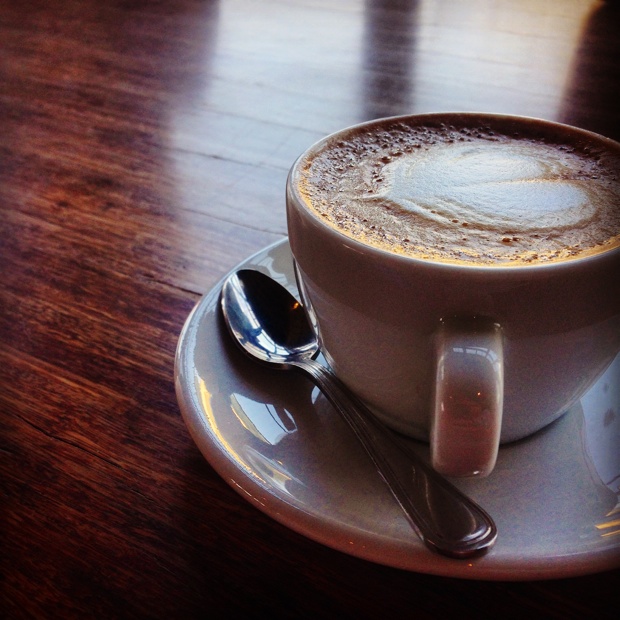 My favorite story about coffee is from the year 1600, when Pope Clement VIII was the head of the Catholic Church. As the story goes, the Pope’s advisers urged him to make coffee a forbidden drink for Christians. They argued that since Muslims were not allowed to drink wine, Satan invented this “hellish black brew” as a substitute. In a moment of remarkable foresight the Pope asked to try a cup before he made his decision. He was so enamored with the concoction that he came up with a different plan. “This Satan’s drink,” he declared to his advisers, “is so delicious that it would be a pity to let the infidels have exclusive use of it. We shall cheat Satan by baptizing it.”

And so it came to be that despite our vast ideological differences across regions and cultures, we can at least all agree on one thing: coffee is a deeply spiritual experience.

It’s not that I didn’t always have a strong connection with my eldest daughter. It’s just that recently, as she’s running headlong into her fifth year of life, we’ve started to connect in ways I didn’t expect. For example, this weekend we spent most of early Sunday morning building Lego models together. How did that happen? How did she suddenly get into stuff I remember liking as a child?

I know everyone always talks about how quickly kids grow up. I don’t agree with that at all. Growing up takes a long time. But I do find these sudden jumps in growth quite surprising sometimes. I feel like I should be better prepared for each jump so I can catch her if she stumbles. I guess that feeling will never go away — especially when she starts dating. Man. That’s going to be rough.

Anyway. A few weeks ago my wife brought the girls to our office for a visit one morning. I made my daughter a Babycino (frothed milk + hot chocolate sprinkles), and myself a Cappuccino. While I was making the coffee drinks my daughter sat at the table and asked me questions about what I’m doing and how the espresso machine works. I talked to her about bean extraction and crema and milk steaming, thinking that it would bore her to tears. But she was really into it. So I kept going and we ended up having a conversation about craft and why it’s cool to take your time to learn how to do things well and how good it makes you feel when you really master a skill.

I can’t remember when my obsession with coffee started. I just know that one day I started reading books about coffee history, and the best ways to brew a good cup. Then I bought an AeroPress and starting Googling for recipes. Next I bought a grinder, and a Chemex, and became annoyingly picky about beans. And before I knew it, I was that guy at dinner parties. The guy who makes you stop what you’re doing to explain where the coffee came from, how I was going to prepare it, and what they should look for when they taste it. But mark my words: when you do eventually taste the coffee you instantly forget how weird I am, and instead start talking about the unexpected party in your mouth (A guest once remarked that it tasted like angels peeing on his tongue. It is, perhaps, my proudest moment).

Charles Maurice de Talleyrand-Périgord — the Prime Minister of France during the early 1800s — once wrote a completely over the top description of how coffee made him feel. Even though he was very likely under the influence of a vast amount of caffeine when he wrote these words, I swear when I’m drinking a great cup of coffee I want to nod in vigorous agreement:

A cup of coffee detracts nothing from your intellect; on the contrary, your stomach is freed by it and no longer distresses your brain; it will not hamper your mind with troubles but give freedom to its working. Suave molecules of Mocha stir up your blood, without causing excessive heat; the organ of thought receives from it a feeling of sympathy; work becomes easier and you will sit down without distress to your principal repast which will restore your body and afford you a calm delicious night.

Yes, the taste of a good cup of coffee is amazing, but it’s about so much more than that. Most of the joy of any craft — and coffee is no exception — is how you get there. My obsession gave me much more than the ability to make a decent cup. The process — the grind, the bloom, the slow pour — is now a comforting ritual that I associate with mindfulness. It’s a deep mental breath to allow my brain to process what’s going on around me. Most of us spend our days being outlandishly busy. But as with all crafts, during the 10 minutes it takes to make a pot of Chemex, nothing else exists. Time slows down, and I’m focused on getting every detail right. Making coffee keeps the chaos out for a few minutes every day — and it helps me focus when I return to my work.

What is your craft? It doesn’t have to be coffee. But is there something that takes you away from this world for a few minutes every day? Something that’s hard enough that it takes such intense concentration that you (gasp!) even forget to check Twitter? Something with a knowledge well deep enough that you’ll never reach the bottom? Those kinds of obsessions are healthy and necessary because they keep us on our toes, curious, always growing, always learning, always grounded because you can’t win a craft. There is always more to learn.

What you get from craftsmanship is not the end of the story. Despite its many personal benefits, I’ve found craft to be surprisingly social. Hours after my family’s visit a few weeks ago I was still thinking about the brief time I had with my daughter that morning. I couldn’t help but feel like it was significant, and that I should create more of those types of moments with her. And not just with her, but with friends and colleagues too. A discussion about craft — especially if it happens around that craft — usually leads into a discussion about passion, and that easily spirals out of control to anything from a new appreciation of life to brilliant product ideas. As people who create software, those discussions can be invaluable for the work we do.

So here we are: our lives intertwined with a drink that had the potential to divide nations, but instead ended up being the catalyst for the creation of many newspapers and universities; the common element in countless debates, first dates, and last dates; and the ever-present, unassuming ingredient to any everyday conversation or meeting. This hellish heavenly brew might just be the perfect ambassador for the value of learning and practicing a craft. It doesn’t just show us how much we personally have to gain from constant learning and a focused mind. It also shows us how a big part of the joy of craft is found in the gathering of people around its edges, and the ideas that are sparked and shared as a result. Let’s actively create and seek out those moments of shared passion for the world and all we get to do in it.

Preferably around a cup of coffee.