Apple as “the third who benefits”, or why developers shouldn’t be upset

Perhaps the most succinct summary of Monday’s Apple WWDC keynote is this tweet by Dustin Curtis: 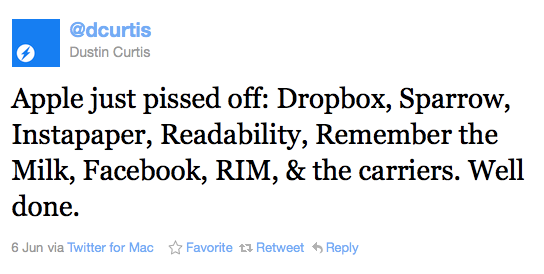 I understand the sentiment, and a lot of the post-keynote blog posts echoed this general statement. The most measured response, in my view, came from Marco Arment, the creator of Instapaper:

If Reading List gets widely adopted and millions of people start saving pages for later reading, a portion of those people will be interested in upgrading to a dedicated, deluxe app and service to serve their needs better. And they’ll quickly find Instapaper in the App Store.

I’m certainly not going to stop using Instapaper. I’m deeply invested in the service and can’t see myself moving to Safari any time soon. But that’s beside the point. Here’s the point.

I find it strange that people are freaking out about how Apple is going after successful apps and integrating them deeply into Lion and iOS. Here’s Rich Mulholland (well, censored a little bit):

For my part, I agree much more with Justin Williams when he says:

Some people grow frustrated by Apple continually making inroads in existing developer’s territory, but it comes with being a part of the platform. The key is to ensure your product lineup is diverse enough that you can survive taking the blow Apple may offer at the next keynote.

And this is where we have to start talking about Sociology theory (No, don’t go away, this is going to be great!). One of the key concepts in Social Network Theory is Ronald Burt’s theory of ‘structural holes’. This theory aims to explain how competition works, and argues that networks provide two types of benefits: information benefits and control benefits.

To understand the role of structural holes in this regard, it is necessary to understand the concept of tertius gaudens. Taken from the work of George Simmel, the tertius gaudens is defined as “the third who benefits” (Simmel, 1923). It describes the person who benefits from the disunion of two others. For example, when two people want to buy the same product, the seller can play their bids against one another to get a higher price for the particular product.

Structural holes are the setting in which the tertius gaudens operates. An entrepreneur stepping into a structural hole at the right time will have the power and the control to negotiate the relationship between the two actors divided by the hole, most often by playing their demands against one another.

This is exactly what Apple is doing, and have been doing from the start when the first iPhone came out (maybe even before). They saw the structural hole between 3rd party developers and consumers, and walked right into it. Through the app store, they built an enormous network (information benefits) where they broker the relationship between developers and users (control benefits). By providing developers with a massive audience, they became “the third who benefits.”

I also don’t think they’ve been particularly secretive about this strategy, so it shouldn’t come as a surprise to developers that if they have a one-platform strategy, and that platform is iOS, they might get disintermediated at some point.

Which brings us back to Marco Arment and Instapaper, and why I don’t think he’s in trouble. Instapaper is an ecosystem that’s intimately part of my workflow. It’s integrated with Firefox, iPhone, iPad, Twitter, Google Reader, Flipboard, Zite, … the list goes on. I’m not going to switch away, because I don’t see Instapaper as an iOS app. I see it as a solution to my reading needs.

So should developers still make iOS apps? Of course. But it’s important to realize that the product shouldn’t be the app. The product should be the problem you solve for users, on multiple platforms and in a simple, integrated way. Those are the apps that will survive (and even thrive) despite any changes that occur on Apple or another platform.