Toward a universal model for software product development

I’ve seen a lot of product development processes over the years, and as with most things, it’s important to take what works for your organization, and leave what doesn’t work.  These processes go by different names, mainly various combinations of the words Product Development Lifecycle (PLC or PDLC).  There are also a common thread through most product development models, and this article assumes that the reader has a basic understanding of the general five steps of product development:

Great work has been done on fine-tuning the details of the PDLC, but it has always bothered me that there is not one universal model for software product development that fits two main criteria:

And that is what I set out to do in this article. END_OF_DOCUMENT_TOKEN_TO_BE_REPLACED

What MSN Mobile can teach us about good design

As designers and user experience practitioners, most of us can look at web interfaces and immediately tell the good ones from the bad ones.  The good ones are usually an indication of execution built on a collaborative and equal effort between different groups and stakeholders.  The bad ones usually point to one of two things:

I came across one such example of poor execution today while browsing the MSN Mobile web site on my iPhone.  Here is what I saw:

END_OF_DOCUMENT_TOKEN_TO_BE_REPLACED

How to increase the value you get out of social media

A common complaint about social networks is that they insulate us by only showing us information we’re already likely to agree with. This solidifies our existing confirmation biases and makes us less likely to see the value of other viewpoints. It’s a legitimate concern, but we only have ourselves to blame. The problem is that if we don’t follow enough people from different types of networks, we’re always going to see the same type of information over and over.  And in this fundamental point also lies the best way to get the biggest benefit from social media.  So stick with me as we discuss some sociology theory, which I promise will lead to some practical implications in the end.

People with a lot of followers on social media have a high degree of Control benefits — they are often extremely influential in their fields, and in unique positions to have control over certain conversations on the web. But being an influencer doesn’t guarantee that you will have strong Information benefits , because you tend to get the same news over and over again if you don’t do a bit of work on expanding your network in a very deliberate way.

Burt’s theory of structural holes aims to enhance both these benefits to their full potential. A structural hole is “a separation between non-redundant contacts” (Burt, 1992). The holes between non-redundant contacts provide opportunities that can enhance both the control benefits and the information benefits of networks. The figure below shows a graphical representation of this definition. 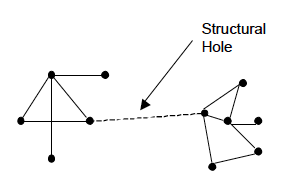 The concept of non-redundant contacts is extremely important, and refers to contacts who give you access to networks you aren’t already part of. Now let’s look at how Mr. Scoble can increase the Information benefits he gets from Twitter.

Optimizing the benefits of networks

There are several ways to optimize structural holes in a network to ensure maximum information benefits:

How to get the most out of social media

If we apply these theories to Twitter and other social media networks, we quickly realize it is not the sheer number of “friends” in your network that count, it is the diversity of the people in your network that is most important. If you only have links to people in your immediate group of friends or colleagues, it will be difficult to get new information, since everyone will pretty much know the same things. This is not to say that you have to start following all those random spammers on Twitter, but it does mean that people with who you have “weak ties” will often provide you with new information and therefore more benefits than your “strong ties”.

So here’s how to make sure you get the most out of social media:

These theories show that we can reduce the number of people we follow while actually getting more Information benefits from social media. We will get new information faster, we will get it only once or twice, and the information we get will be more diverse.

With the three recent big stories in Facebookland (the FriendFeed aquisition, real-time search, and now the test launch of Facebook Lite) it doesn’t take a rocket scientist to figure out that Facebook is going hard after Twitter. (Update 1/16/2010: Facebook just rolled out “via” as their version of Twitter’s “retweet”. That, combined with recent changes to their privacy policy to make the platform more open, are two more clear examples of Facebook’s “Become Twitter” strategy)

What is more difficult to understand is why they are doing it.  Maybe it’s a personal vendetta because of the failed acquisition talks?  I just don’t see the business reason for this.  Here’s why I think Facebook should forget about Twitter and focus on making its own platform great:

It is well known that Twitter skews heavily towards younger tech-savvy users, with the rest of the population finding it hard to see the point.  Facebook, on the other hand, is increasingly being used by an older demographic.  The fastest growing demographic on Facebook is women over 55.

Why is all this important?  Because regardless of what Facebook wants to be, the demographic that is settling in on the site for the long haul is different from the Twitter user base — and they have totally different needs and behaviors. At this point, Facebook is too established as a brand to be able to force their product onto the target market they want.  And why would they even want to?  They have access to a much larger user base than Twitter.  Which brings me to my next point…

END_OF_DOCUMENT_TOKEN_TO_BE_REPLACED

The connection between user experience and brand loyalty

I recently attended a brand presentation where the video below was shown. It’s pretty funny, and also a perfect example of how interactive products and consumer-generated content should fundamentally change our traditional views of customer loyalty. Loyalty in our current environment is fostered through repeated great (user) experiences, not just through advertising and coupons.

But even though I like the general point the video is trying to make, I think it stops a little short of the real issue. It is saying that we should listen to our customers better. But that’s not enough — we need to understand customers in ways they don’t even understand themselves, and then build experiences that meet unmet (and sometimes unconscious) needs through repeated, positive experiences that deepen the customer-company relationship.

Uncovering these needs happens not just through “Voice of the Customer” research programs, but also through more contextual research efforts like ethnography and contextual inquiries (combined with validating quantitative research). I believe this is where traditional Market Research programs like NPS (Net Promoter Score) only tell a part of the full brand loyalty story (albeit an important part, for sure).  There is evidence that the tide is turning on this topic as the field of HCI (Human-Computer Interaction) becomes more mainstream and user experience research techniques become more accessible.

There is a powerful synergy in discovering how to deepen true customer loyalty through collaborative efforts between Market Research and User Experience Research, and we need to bring these two disciplines closer together (this view is also very much in line with the thinking described in the excellent Adaptive Path essay The Long Wow).

I’ve been working on a project where we’re trying to come up with a way to establish a visual design “clutter index.”  The goal is to see if there is some threshold beyond which web page clutter impacts business metrics like conversion and click-through rates.  The challenges are widespread of course, and mainly focused on the following 3 areas:

END_OF_DOCUMENT_TOKEN_TO_BE_REPLACED

I have recently noticed an interesting trend among the people I follow on Twitter. It appears that my network is dividing itself neatly into 2 camps: those who care deeply about the content they publish, and those who use it more casually. Let me explain…

Saying “good night” to everyone you know

Twitter users who casually update their status without thinking about it too much continuously say things like “Yep,” “Good night tweeple,” and “Banging my head against the desk.” Cryptic information that can be quite difficult to figure out. I’m not saying that this is necessarily a bad thing. It’s just clear that some people view Twitter as a broadcast medium mainly meant for people they know in the real world, and that’s fine (I tend to think that’s what Facebook is for, but let’s not split hairs about this).

I’m also not suggesting that all tweets should be serious — the odd random or exasperated update can be interesting, enlightening, and often very funny, and it also shows that there’s a real person at the other end. I do follow a lot of these casual users, but I know all of them personally so their updates are meaningful to me. And of course there is always the option to stop following someone, so you only have yourself to blame for the content you receive on Twitter.

The dangers of “test and learn”

A recent discussion on a user experience forum I participate in turned to the topic of A/B testing.  I really enjoyed the conversation so I wanted to reiterate some of the points I made, and expand on it a little bit as well.  It’s not my goal to define A/B testing here but to share my opinion on its use.  I believe that even though A/B testing can be extremely valuable to help identify the best iteration of a site or a particular page, it should never be used in isolation.

Since A/B testing is relatively cheap to do and the results are so compelling, companies are in danger of adopting a “test and learn” culture where pages are just A/B tested with no additional user input.  That would be the wrong way to go.  A/B testing shouldn’t be used on its own to make decisions, it should always be used in conjunction with other research methods — both qualitative (such as usability testing, ethnography) and quantitative (such as desirability studies).